The blockchain: a new framework for robotic swarm systems

Swarms of robots will revolutionize many industrial applications, from targeted material delivery to precision farming. However, several of the heterogeneous characteristics that make them ideal for certain future applications — robot autonomy, decentralized control, collective emergent behavior, etc. — hinder the evolution of the technology from academic institutions to real-world problems. 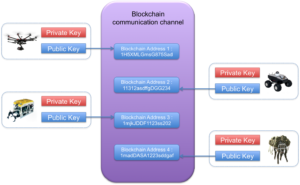 Blockchain, an emerging technology originated in the Bitcoin field, demonstrates that by combining peer-to-peer networks with cryptographic algorithms a group of agents can reach an agreement on a particular state of affairs and record that agreement without the need for a controlling authority. The combination of blockchain with other distributed systems, such as robotic swarm systems, can provide the necessary capabilities to make robotic swarm operations more secure, autonomous, flexible and even profitable.

This project aims to know how blockchain technology can provide innovative solutions to four emergent issues in the swarm robotics research field. New security, decision making, behavior differentiation and business models for swarm robotic systems are described by providing case scenarios and examples. The white paper that outlines several potential applications of this synergy can be found here: