Several weeks ago, a Japanese government representative came to our lab in order to give us a lecture. With all the bowing, reverence and the extremely polite language that my superiors used in order to address her, I thought she should be an important person in the government.

Indeed, she was one of the representatives for the science and technology bureau of the Japanese Government. During her presentation, which lasted for around an hour and a half, she introduced the new plans of the Japanese government regarding the importance of robotics as one of the main engines of economic growth for Japan. During the lecture, she remarked (several times) how much money and time the Japanese government has invested in training and education of future researchers in this field. Though at first it sounded like a political meeting, it took a different turn, when apart from explaining the good points of this kind of educational government projects, she also explained us the big challenges Japanese society is currently facing and how robotics engineering seems to provide an answer.

It is well-known, that the Japanese population is one of the most rapidly aging societies in the world. The current birth rate is around 1.3 children per married woman. Nowadays, around 21% of the population of Japan (127.8 millions) is more than 65 years old. Taking into account these facts, the Japanese Ministry of Health foresees that Japanese population will decrease to 110 million by 2035 and to 89 million by 2055. This dramatic fall in the economically active population figures, makes it extremely difficult for Japan to sustain the industrial level that brought the country to its golden decade (welfare society) since the years of the recovery (50s and 60s).

One of the key aspects behind this drop in birth rate is the decrease in family budget. However, when women (the heart of this issue) are asked about what should be changed in order to deliver more kids, the big majority answers: “We need workplaces where it is easy to combine work and family life”. Since the beginning of the 80s, the Japanese government (which can plan and foresee like no other) tried to mitigate the problem, receiving the offspring of all those Japanese (nikkei-jin) who emigrated in hard times (beginning of the XX Century). Even though predictions were optimistic, the number of these second or third generation Japanese didn’t even reach 200.000 (less that 1% of the population). When the government was asked, if they would open the frontiers to other immigrants who would be willing to establish themselves in Japan, the answer was not very promising. The former Prime Minister, Koizumi Junichiro stated on several occasions: 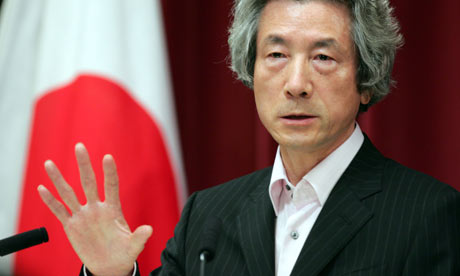 Koizumi Junichiro at a public appearance

“If [foreign labor] exceeds a certain level, it is bound to cause a clash. It is necessary to consider measures to prevent it and then admit foreign workers as necessary. Just because there is a labor shortage does not mean we should readily allow [foreign workers] to come in (Kashiwaki, 2006).”

Some experts believe, that Japan is continuing a post WWII policy, in which automation is preferred to immigration. The preference in favor of automation before immigration shows us one of the reasons why Japan owns and produces more than half of the industrial and service robots of the world. Several academics (especially anthropologists) claim, that robots are preferred over immigrants (especially in the domestic service), since robots don’t have cultural or historical differences (due to past wars) with their employers, which could make them feel uncomfortable. Thus, the Japanese government and its Prime Minister, Abe Shinzo (the one who defended the candidacy of Tokyo for the 2020 Summer Olympics) decided to launch an ambitious program called Innovation 25 in February 2007. Innovation 25 is a visionary idea for reinventing the Japanese society by 2025, with the intention of reverting the drop in birth rate and accommodating the increasing aging population. This project (among other proposals) emphasizes the role of service robots within traditional social institutions, such as the Japanese family. Innovation 25’s proposal (which is available online) outlines how life in Japan should be in a not so distant future (11 years from now). Especially interesting is the section, where the daily life of a Japanese family called Inobe (inobeshion is the Japanese word for innovation) is described. This ideal family consists of a married couple, a son, a daughter, the parents of the head of the family, and of course, the last member to enter the clan; a robot called Inobe-kun (-kun is the suffix for young boys in Japan).

After the introduction of all family members, the story presents us their daily routine. Starting at 06:30 AM, when the elderly get up, until 23:00, when the LED lights of the house turn off automatically. Yumiko (the housewife) is the one who has the closest relationship with Inobe-kun. The text describes Yumiko as a dynamic woman, who is able to work from home (she “teleworks” for a design agency). The help little Inobe-kun offers has liberated her from doing some domestic duties, which indeed enables her to work and earn some extra money for the family, even though it is from home.

When Yumiko finishes her work with the design company (normally after 17:00), she checks whether Inobe-kun fulfilled his daily duties:

YUMIKO : “Have you finished cleaning the house? Any messages? Is there a hot bath ready?”

INOBE-KUN : “I cleaned everywhere except your workroom. Grandpa says he comes home at 6:00. I think grandma comes home soon because she says she will be back at around 5:00. I will get a hot bath ready at around 6:30. I just got a message from daddy saying he would be home at around 7:00.”

The images that come together with the text are very interesting and full of details. In all of them, gender roles are extremely clear (it shares some similarities with the popular series, The Jetsons). Despite Inobe-kun’s help with some domestic chores, in the pictures Yumiko keeps being the one responsible for the housework. Instead of being a useful tool for the whole family (helping the kids or the grandparents), Inobe-kun seems more like an extension of the housewife. Innovation 25 has received a lot of criticisms from the Japanese society (especially from bloggers), since the project does not mention, neither answers, How this type of robots can be useful for other types of families, such as single mothers or people who live alone (so common in nowadays Japanese society), etc … Others question the morals and values this project might give to future generations:

“It seems like I am reading a science fiction novel. Am I the only one who does not share the vision of Prime Minister Abe about Japan’s future? If the Japanese have become spiritually and intellectually impoverished it’s because they leave things up to machines in the name of convenience; they’ve lost the ability to gain knowledge from the natural environment”

It is very true, that the Japanese government is trying to solve some of their most important problems with the aid of new technologies. Innovation 25 is just one of the ideas for giving solutions to those problems, particularly emphasizing the role of robotics in ensuring the stability of Japanese economy and their social institutions. However, I question myself as a researcher, what kind of purpose does the Japanese government give to technology developed in labs like mine? It seems like researchers work hard in order to produce innovative technologies, which end up being used in order to continue very old life models. It is really curious to me, that every time I get to the bottom of massive governmental projects (26 billion dollars in 18 years), I end up finding the interesting Japanese paradox: Invest in cutting-edge technology in order to sustain and preserve a conservative lifestyle.

What do you think? Is Innovation 25 a retro-futuristic project?